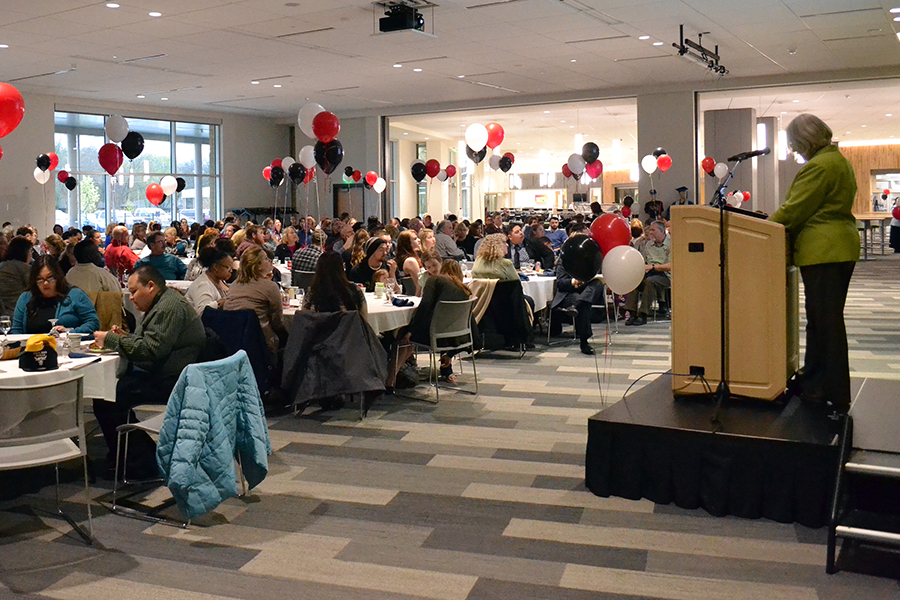 Clarion Staff Photo
Advisor Jackie Dahlke, right, celebrates with students at The National Society of Leadership and Success Madison College Induction Ceremony on April 27.
At The National Society of Leadership and Success Madison College chapter Induction Ceremony, the feeling of pride among the inductees was impossible to miss. The student members were proud of what they had gained from the experience and all that they had accomplished.
While for some, it was just an induction ceremony, for others it meant so much more. Members had gained unexpected benefits out of joining the NSLS. Some inductees such as Kayla Strom, a culinary student, and Ryan Neibuhr, a welding student, joined just to “check it out,” and see what it was like, but, for both students, it grew into something more. They ended up making new friends and finding motivation and encouragement.
The NSLS is a leadership honor society founded to help students “discover and achieve their goals.” The Society wants members to dream big and reach for what seems unachievable. The question they ask their members is: “What would you do if you knew you couldn’t fail?”
Though before members can realize their goals, they have to attend orientation. Here, members learn the schedule of events for the semester and what they will have to do to be inducted. The next step after orientation is leadership training day. This is where students identify their goals and the steps needed to achieve them.
Next are the speaker broadcasts. Here, members listen to a live-stream, where celebrities tell their story about how they have gotten to where they are today. For some members, it was motivating to hear about the struggles the speakers went through and how they overcame obstacles. Members needed to attend at least three of the speaker broadcasts to be inducted.
After this, members had to get into groups of four to six people, called “success networking teams” (SNT). For many students, these groups were extremely helpful and motivating. “We encourage each other” said Strom; her group’s input helped her to open new doors in her life.
These groups are meant to be a support system, and to help members hold each other accountable. While for some, it was a new experience to be open about their goals, they found their SNT’s to be an open and supportive environment, and that it really helped to talk to other people. Members had to meet with their SNT’s at least three times before they could be inducted.
The last and final step is the induction ceremony. At the ceremony, members are presented with a certificate of leadership training and a lifetime membership to the NSLS. Out of the 301 members at Madison College, 73 were inducted on April 27.
While in the beginning Strom joined just to see what the NSLS was about, at the end she realized: “I’m doing this for me.”
Originally published on theonlineclarion.com